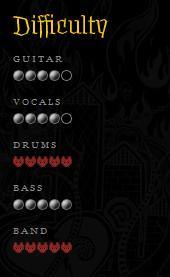 Won't Get Fooled Again, by The Who, is a song available on disc in Rock Band 1 and exportable to Rock Band 2 using the Disc Export feature.

A cover version of Won't Get Fooled Again is playable in Rock Revolution.

Despite popular belief, the synth-organ parts aren't looped. Drummers should especially take notice, as a well trained ear can pick up the change in the music just before Keith Moon's thunderous re-entry into the song.

The final song from the "Who's Next" album, Won't Get Fooled Again is often used as The Who's final song at concerts, with an accompanying light show during the synth-organ solos. The synth-organ was originally only a stand in for computer generated music using the audience's vital signs, though the idea proved to be too far ahead of its time and was delayed with the rest of "Lifehouse," The Who's proposed rock opera. The song also appears as the theme song for the television program CSI: Miami.

Retrieved from "https://rockband.fandom.com/wiki/Won%27t_Get_Fooled_Again?oldid=29299"
Community content is available under CC-BY-SA unless otherwise noted.