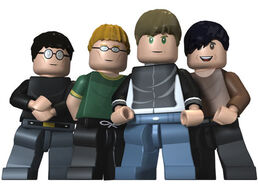 "Song 2" is a song by Blur which is aka "Whoo-Hooo," which is the chorus. The title is not in the lyrics, as the name "Song 2" was originally just a working title, with Blur introducing it that way during live performances. Fans soon identified the song as "Song 2" and the title stuck. (thanks, Kyle - Newborough, MT)

With loud guitars and cryptic lyrics, the band wrote this to make fun of Grunge music that was big in America at the time. It ended up being Blur's biggest hit in the US. They are huge in England, but never caught on in the States.

Blur's bassist Alex James told Q Magazine's 1001 Best Songs Ever: "I remember having a really bad sweaty hangover that day. And it was very sunny. We were at Mayfair Studios, Primrose Hill, and I'd been trying to think of a title for a TV show a friend was doing about Rock Wives. Then it came to me: 'Hits and Mrs!' So I thought that was my work for the day over. It sums up Song 2 really. We didn't think about it at all. Graham (Coxon) set up two kits, Dave (Rowntree) and Graham started playing drums at the same time, this real "aggro" beat. Then the chorus is two distorted basses and Damon's guide vocal. It was kind of a throwback. We'd always done brainless rocking out, though maybe it's not what we're known for." (thanks, Edward Pearce - Ashford, Kent, England)

This is the second track on the CD, the second single from the album, it hit #2 in the UK, and it is 2 minutes long.

At the 1997 MTV Video Music Awards, This was nominated for Best Group Video.

This was used in commercials by 2 different auto makers:

It was also used in ads for video game FIFA '98 and for Pentium II processors.

This was used in an episode of The Simpsons in a scene where Homer and the guys go to the Super Bowl. It also appeared on the South Park episode "Stanley's Cup."

This was also featured in many trailers for the movie Starship Troopers. As is becoming common, the song did not appear in the film itself. (thanks, Kei - Salem, OR)

At one point, Blur weren't sure if this was even a contender to be included on the album, thinking it too short. However, their US record company loved it. It is probably their most popular song, certainly their most well known.

The band tried to add more production to the recorded version and finish it off, but without success. They saw this as a learning experience.

Bass player Alex James says it was "The realization you don't have to polish everything. Sometimes the thing you do first of all is when you mean it." (thanks, Adam - Dewsbury, England)

Producer Stephen Street told Q magazine March 2009 that "Damon's guide vocal was pure babbling but it worked so well I suggested we went with it. He just needed reassurance that what he'd done was good."

Retrieved from "https://rockband.fandom.com/wiki/Song_2?oldid=28650"
Community content is available under CC-BY-SA unless otherwise noted.