The Rock Band Drum Set is a drum set controller with of four colored drum pads and a kick pedal.

From left to right the colors of the drum pads are:

In game, the red pad most often represents a snare drum.

Lefty flip causes the drum track to be reversed. A red note for a right-handed drummer would become a green note on lefty flip. On the track, the four drum pads appear colinear in the order that they appear on the drum set. Kick drum notes appear as horizontal orange lines. The height of the drum pads can be adjusted up to 27" above the ground and down to 18". The kick drum pedal can be placed anywhere on one of the horizontal beams of the drum set base. A common problem with the kick drum pedal is that it will, more than likely, eventually break.

Pro mode for drums is introduced in Rock Band 3, requiring players to equip the existing drum set with up to three cymbal units. The game will mark cymbal notes as circles instead of the regular square drum pad notes, and the drum player will be required to hit the cymbals instead for these notes when they occur. 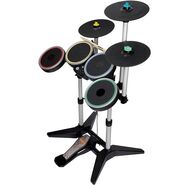 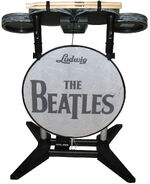