Rock Band 2 is the second main title in the Rock Band series and the sequel to Rock Band. The game was first released in North America on September 14, 2008 for Xbox 360 and October 19, 2008 for PlayStation 3 before being released on PlayStation 2 and Wii on December 18, 2008. In Europe, the game was initially released with the instrument bundle on October 19, 2008 for Xbox 360 before getting a standalone release on November 21, 2008. It was then released in Europe on March 27, 2009 for PlayStation 3 and PlayStation 2 before being released on Wii on October 9, 2009. It features new songs, a new tour mode, and more character customization options. Multiplayer has also gotten an overhaul, featuring massive band play online and expanded tour modes.

The Rock Band 2 instruments have some improvements over the originals. The drum set has a softer pad system that reacts to lighter hits and makes slightly less noise. There is also a small plate of metal over the foot pedal, which does not make it unbreakable, but makes it stronger at the least. The guitar is slightly shorter and has a de-lagger built in, so HDTVs will no longer have trouble with it. The strum bar still does not click, but it has been made sturdier and easier to strum. The way compatibility works with this game is ridiculously complex, but this is making it simple.

In Rock Band 2 there is no linear setlist for solo play like in its predecessor, it is more like the band play in that you get fans as well as money, and you play setlists as you go. Unlike Rock Band 1, you will get at least some fans if you play on a lower difficulty than usual instead of none at all. One person can play any instrument you want at any time. This can be single player or multiplayer.

As with Rock Band 1, the leaderboards have been added to online play. When you play a song in any mode, be it tour or a challenge, your score is submitted to the Leaderboards, which detail scores by player account, by band totals, or songs by band. Not much has changed from Rock Band 1 besides a slightly easier to navigate menu and a tad faster loading time.

Battle of The Bands

In the game, a new feature that is updated every day is the new Battle of the Bands. When you pick a city with a trophy icon or go to Battle of the Bands from the Practice Space, you will find several battles to play. In order to use these events, you must have online enabled, unfortunately. Some requirements for these battles could be any of the following, including

Once you complete the battle, you will be notified of your place in it on the Leaderboards. You will be listed by band name, not by player name. The Battle of the Bands events do not affect your Tour score or fans.

Now that everything else has been covered, we may move on to the customization. The outfits are now separated into categories like in the previous installment, with one new category. The instruments can also be purchased from here, as well as any accessories you may have come across. You can even change your hairstyle.

The new audition mode allows you to playtest new releases to review them and to see if they are fit for release on the Rock Band Network. This feature requires an account which is a member of the XNA Creators Club and is connected to Xbox Live.

The Endless Setlist 2 is the sequel to the Endless Setlist in Rock Band 1. The Endless Setlist 2 contains all 84 songs in the game, and it's played in Shanghai instead of Moscow. After gaining 900 stars, over 468,000 fans, winning a worldwide promoter, and getting into the Rolling Stone Hall of Fame, you will unlock this insane setlist. You cannot play on easy, so if that's what you're used to, maybe it's time you moved up a level. The songs are all listed in overall band difficulty, and the setlist starts with "Eye of the Tiger" and ends with "Painkiller". If you fail a song at any time during the setlist, you will not have to start it all over, you will just continue at the song you lost on. The number of fans you lose is not affected by how far along you are, it remains at a constant 71,000 or so. Completing the Endless Setlist 2 without pausing the game or failing a song will earn the player an Xbox 360 achievement or PS3 Trophy called 'The Bladder of Steel.' This is a reference to the player, who must endure over 6 hours of gameplay with very short breaks between songs. If attempting the Bladder of Steel on Guitar, you are given a short break during AC/DC's "Let There Be Rock". You may be able to take a quick bathroom break, but you run the risk of failing the song if you don't return to the game on time. Good luck, Rock Band maniacs. The songs you have downloaded are not played, it's only the on-disc songs.

On the back of your Rock Band manual as well as in game, there is a code you are given to put in on the PSN. This will give you a patch to copy all of your Rock Band songs onto a flash drive/memory stick and be put into Rock Band 2. The cost for the patch way only $5. There are only three songs on the setlist that are not transferred over, because the makers of RB2 do not have the copyrights to those songs anymore. All of your downloaded content will be transferred over free of charge.

Rock Band 2 includes twenty playable characters known as "Session Musicians". When playing in Solo Quickplay, the game will randomly select a character for the player when playing guitar, bass, or drums. When singing lead vocals, the game randomly selects a male character from the lineup for any songs with male vocals, and a female character from the lineup for any songs with female vocals. The Session Musicians can also be accessed via Band Quickplay, Tug of War, or Score Duel. Unlike Solo Quickplay, the player(s) can select which character they play as. They can also select any of the characters created in the Character Creator. Ten of the playable characters were originally from the first game while the other ten are new for this game. However, these characters do not appear in the PlayStation 2 version, nor are they playable. Much like the Wii and PlayStation 2 versions of the first Rock Band, the PlayStation 2 version contains highly compressed pre-rendered videos featuring bands of animated characters playing specific songs based on the songs' genres.

Microphone (The same from RB1) 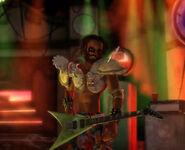 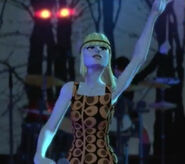 The Duke of Gravity

One of the game's loading screens in the World Tour mode

NOTE: This character is not in any version of this game.

NOTE: These characters only appear in one of the demo mode videos, as well as in the background of the main menu and song selection menu.

NOTE: This guitarist does not perform with this singer in any version of this game.

NOTE: These characters only appear in one of the demo mode videos, as well as in the background of the main menu and song selection menu.

NOTE: The lyric font is different.