The effects switch feature for Xbox 360 & PlayStation 3 has the effects of:

Though the PlayStation 2 effects are:

The Rock Band drum set has 4 rubber drum pads and a kick pedal. Each pad has a colored ring around it to show you the notes on the screen.

There is also a lefty flip mode for the drums. The drum kit has buttons in the middle to navigate through the menu. There are some instances in which changing some pad sounds come into play. In songs like "Orange Crush" by R.E.M. and "Run to the Hills" by Iron Maiden, the red pad becomes a hi-hat while the yellow pad becomes a snare drum. Changes in these pads make it easier for the consumer to play in most situations.

The microphone is very similar to the microphone on Karaoke Revolution developed by Harmonix. The microphone can be used with the headset and is USB. The singer is usually the one who changes the pitch & how closely they match it to the lyrics.

The microphone also can be used as a tambourine or cowbell by tapping it when prompted.

Rock Band 1 on the PlayStation 2/Wii

Unlike the Xbox 360 and PlayStation 3 versions of Rock Band 1, the PlayStation 2 and Wii versions have features that were stripped-down including Band World Tour mode. In the Band World Tour mode for the PlayStation 2 and Wii versions of the game, players cannot create their own create characters, nor can they travel to cities around the world, choosing a venue, or a setlist to play. The online features are also not available in these versions of the game, as it only supports 2-4 local players to play as a band. The band performance videos in the Wii and PlayStation 2 versions consist of highly compressed pre-rendered videos featuring bands of animated characters playing specific songs based on the songs' genres. 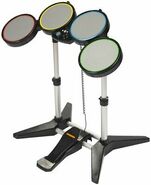