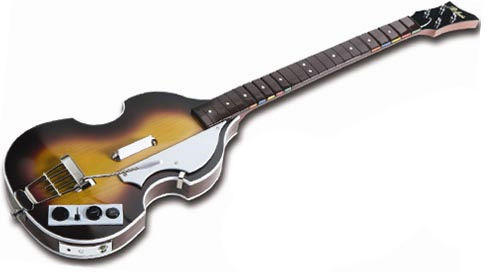 The Höfner 500/1 Violin Bass (nicknamed the "Beatle-bass" or "Cavern-bass") is Paul McCartney's hollow-bodied bass guitar manufactured by Höfner under several varieties. It was introduced in the mid-1950s.

In 1956, Walter Höfner invented an electrically amplified, semi-acoustic bass guitar.[1] The hollow body made this style of guitar very light and easy to play, as well as giving it a rich tone, similar to that of the traditional double bass. A major advantage for the bass came in early 1961, when it caught the eye of a young Paul McCartney. McCartney is left-handed, and he admired the instrument's symmetrical shape, allowing him to simply switch sides.[2] McCartney would acquire two of these models over time. His original 1961 model, and an updated 1963 model the company gave him. Afterwards, McCartney mainly played the 1963 model, leaving the original to serve backup duty. In 1964, he had his 1961 model refinished in sunburst and had new pickups and an updated pickup surround system installed. He can be seen using this bass in the revolution promo video, strangely with the strap attached to the top of the headstock instead of the neck heel strap button. He continued to regularly use the violin-bass until 1965, when he switched to a Rickenbacker 4001S; afterward, he would rotate between the two. Soon after the recording of Let It Be, the 1961 model was stolen from Abbey Road Studios, a fate met by much of the band's equipment over the years.[3] He is still in possession of the 1963 bass as of 2009[update].

The following variations are currently sold by Höfner[4]:

A replica of the Höfner bass used by Paul McCartney (albeit right-handed) is used as the basis for a guitar controller, included with the special edition bundle of The Beatles: Rock Band.

Retrieved from "https://rockband.fandom.com/wiki/Höfner_500/1?oldid=29915"
Community content is available under CC-BY-SA unless otherwise noted.