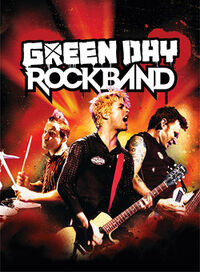 Green Day: Rock Band (abbreviated GD:RB) is the fifth main entry in the Rock Band franchise. It was developed by Harmonix Music Systems and released on 8 June 2010 for the PlayStation 3, Xbox 360 and Nintendo Wii. It is the second band-exclusive Rock Band game following The Beatles: Rock Band.

The game plays in the same way as the main Rock Band series. Green Day: Rock Band features reconstructions of three venues from past tours. Tracks from the Dookie tour are performed in the fictional "The Warehouse" venue. Milton Keynes National Bowl in England is the setting for the American idiot era and The Fox Theater in Oakland hosts the 21st Century Breakdown tour.

The game contains a quickplay mode, where players can perform any tracks they wish as either a soloist or as part of a local or online band. This mode can be played in any difficulty level, with a no-fail option available on all levels, and a automatic no-fail on easy. Scores in quickplay mode are added to an online leaderboard for comparison with other online players.

Also included is a Career mode in which tracks are played in order to complete the three Green Day tours. Each tour consists of setlists of individual tracks and challenges. On completion of each track, the player is awarded Cred depending on how well they play (One Cred for a three-star performance, another for five-star and one for completion of a setlist. Each Challenge is made up of a series of songs which have to be completed consecutively to a particular standard (e.g a three song challenge may have a 13 out of 15 star requirement). Challenges are unlocked when a certain set of individual songs are completed, and a minimum amount of Cred is reached.

Career mode can be completed in solo mode, as a band, or as an online band. The Won't Make it for Dinner Achievement (Bronze/40G) is awarded when a four-player band (either local or online) makes it from career start to end credits (excluding challenges) within 12 hours.