Rock Band Wiki
Register
Don't have an account?
Sign In
Advertisement
in: Songs, Songs by Survivor, 1982 Songs,
and 25 more

Eye of the Tiger

Eye of the Tiger is a song by Survivor which was the theme song to Rocky III, which was the biggest movie of 1982. Tony Scotti was the president of Survivor's record label, and he played Sylvester Stallone some tracks from the previous Survivor album, Premonition. Stallone thought the sound, writing style and street appeal could fit in his new movie, so he called called Jim Peterik and Frankie Sullivan, who were Survivor's primary songwriters, and left messages on their answering machines. Says Peterik, "Answering machines were still something of a novelty back then and to see that blinking light was a thrill. When I pressed the playback button I heard, "Hey, yo, Jim, that's a nice message you got there. This is Sylvester Stallone.' It was too thick to be really him, but it was him. That's really the way he talks."

The first 2 Rocky movies used a very popular orchestral theme written by Bill Conti. That song, "Gonna Fly Now," was a #1 hit in 1977. Says Peterik: "We didn't want to do anything like that. Stallone, in his first conversation to us, he made it real clear he wanted to distance himself from that first song. To him, it was great, but he wanted something to get to the youth market, the cutting edge. Looking back at age 53, it's hilarious to think I was once part of the cutting edge. We attempted to steer clear of the 'Gonna Fly Now' thing."

Peterik: "When we got the initial rough cut of the movie, the scene that 'Eye Of The Tiger' appears in was cut to 'Another One Bites The Dust' by Queen. Frankie and I are watching this, the punches are being thrown, and we're going, 'Holy crap, this is working like a charm.' We called Stallone and said, 'Why aren't you using that?' He goes, 'Well, we can't get the publishing rights to it.' Frankie and I looked at each other and went, 'Man, this is going to be tough to beat.' We had the spirit of, 'We've got to try to top this.' I started doing that now-famous dead string guitar riff and started slashing those chords to the punches we saw on the screen, and the whole song took shape in the next 3 days."

In the movie, Rocky Balboa is shown resting on his laurels, living the good life, doing American Express commercials and photo-ops and slacking off his training regimen. In stark contrast were scenes of the ominous Mr. T, training hard, sweating, bleeding and pouring out every last ounce of effort to become the boxing champion of the world. After the death of Rocky's trainer, played by Burgess Meredith, Rocky's friend (and former rival) Apollo Creed, played by Carl Weathers, implores Rocky to get back "The Eye Of The Tiger," meaning his edge and his hunger to be the champ.

Peterik: "Frankie came in with the lines, 'Back on the street, doin' time, taking chances.' I loved those lines immediately and suggested, 'Rising up, back on the street, did my time, took my chances' to make it fit with the story line and to make the rhythm of the words fit the music I was hearing in my head. That was certainly the lyrical spark that got the song started. The next two hours flew by in a flash as we jammed, cassette recorder running non-stop to catch anything good we did for future reference, and at the end of the day, the music was about 80% complete and the lyric about 30%. Over the next few days, I worked hard on the lyrics, remembering pieces of movie dialogue like, 'Went the distance,' referring to the central phrase of the first Rocky movie."

Peterik: "At first, we wondered if calling it 'Eye Of The Tiger' was too obvious. The initial draft of the song, we started with 'It's the eye of the tiger, it's the thrill of the fight, rising up to the spirit of our rival, and the last known survivor stalks his prey in the night, and it all comes down to survival.' We were going to call the song 'Survival.' In the rhyme scheme, you can tell we had set up 'rival' to rhyme with 'survival.' At the end of the day, we said, 'Are we nuts?' That hook is so strong, and 'rival' doesn't have to be a perfect rhyme with the word 'tiger.' We made the right choice and went with 'Eye Of The Tiger.'"

Peterik came up with the intro while driving his car one day. He was looking for a dramatic way to start the song, emphasizing the slashing punches being thrown in the fight sequences. It was reminiscent of an intro he and Sullivan had put together a few years earlier for the song "Youngblood" on Survivor's first album.

Stallone loved the song. When he heard the demo, he told the group it was exactly what he was looking for, but requested a mix with louder drums and asked if they could write a fourth verse instead of repeating the first as they had done. The group did what Stallone suggested. They went about modifying the first verse and remixed the song.

This was also used in Rocky IV, where Rocky takes on the Russian boxer Ivan Drago. Once again, Stallone asked Survivor to write the theme song. They came up with "Burning Heart."

Peterik: "Stallone has a good ear for a hook. Just listen to his dialogues - he wrote those scripts. He came up with 'Eye Of The Tiger' for that script and those hook phrases like 'I'm going to knock you into tomorrow.' All that stuff is Stallone, he's a genius with dialogue. Songs are nothing more than dialogue set to music as far as I'm concerned."

This song has become very popular among people in physical therapy, marathon runners, weightlifters, and just about anyone facing a challenge. Says Peterik:

"People training for boxing matches, that's a natural, but in every sport, that song has crept into the motivational aspect of it. I never would have predicted it. It seems obvious now, but we just wrote a song for a movie. The fact that it was huge wasn't a big surprise at the time, but what surprises me is that it's still around. It's still credible, it's still not a joke, even though the Starbucks commercial kind of makes it a joke. I just know there's something in the water with that song. I remember the song came out and we were on the road with REO Speedwagon. The song was getting huge ovations and I thought, 'Oh, cool,' but it wasn't until I went to a Pizza Hut restaurant in some god-forsaken town in America. I was sitting there all alone, eating pizza when the song comes on the jukebox. This little 5-year-old girl jumps up from her seat, hits the dance floor and starts screaming, 'They're playing my song!, they're playing my song!,' and start's dancing to the song. I go, 'Now I know we have something.'"

MTV was around for about a year when this was released. Over the next few years, it became standard practice for any popular song from a movie to use footage from the film in the video. These videos were great promotion for the movies, and often didn't show the performers at all (Footage from Footloose, Flashdance and Top Gun showed up on MTV in videos like "Maniac" and "Danger Zone.") Peterik explains how this video came together:

"Initially, it was going to be footage of the band performing contrasted with footage of the movie. One member of the group objected to that because he wanted to feel that the group was a group on its own and not just tied to the movie, which was pretty valid motivation. I didn't agree with it. I thought, 'Hey, let's capitalize on this movie.' The same person came up with a storyboard mimicking Stallone's rise to fortune to a young band from Chicago's rise to fortune and notoriety. That became the video of a band woodshedding in a funky warehouse, then walking down the street in a funky part of town with determination on their face and eventually hitting the big stage and performing the song. That's what came out. It was a popular video, but it was in the very early days of video. I look at it now and just cringe because it was so stiff and primitive."

This won a Grammy for Best Rock Performance By A Duo Or Group. It was also nominated for an Oscar.

Peterik left the band in 1996 and forfeited the Survivor name to Sullivan. When the CBS TV show Survivor became a huge hit, they released a soundtrack to the show using the name Survivor. Sullivan sued, claiming CBS was creating confusion by using the Survivor name on an album.

In 2004, this was used in a Starbucks commercial where Survivor follows around a young businessman named Glen and motivates him with a modified version of this song.

Peterik: "I guess if you want to analyze it, it would be an unbelievable, powerful beat which is so simple and primal. It's the reason marching bands still make formations to it, it's very simple. It's 2 and 4, that's it. Then you have the term 'Eye Of The Tiger' and the tiger imagery. It's a great image, it's a ferocious image. Then you have the very simple melody - the chorus is like 3 or 4 notes. I guess simplicity with a message people can relate to. It's all those things."

Dave Bickler sang lead on this. When the group formed, he and Peterik shared vocal duties (Peterik sang lead with The Ides Of March), but after a while the band decided they wanted one lead singer, which was the trend with bands like Journey. In 1984, Bickler left and was replaced by Jimi Jameson, who sang on their hits like "High On You" and "The Search Is Over."

As a teenager, Peterik formed The Ides Of March, who had a hit in 1970 with "Vehicle." In addition to other Survivor hits like "High On You" and "The Search Is Over," he wrote many songs for .38 Special. He continues to write songs and still plays with The Ides Of March. He is author of the book Songwriting For Dummies. (Thanks to Jim for speaking with us about this song. For more, check out www.jimpeterik.com.)

In 1984, Weird Al Yankovic recorded a parody of this song called "The Rye or the Kaiser (theme from Rocky XIII)," which finds Rocky working at a deli in his old age, still punching slabs of meat from time to time. Yankovic was a bit prescient, as there ended up being 6 Rocky movies, although none of them featured Rocky working in a deli. (thanks, Cliff - Burkesville, KY) 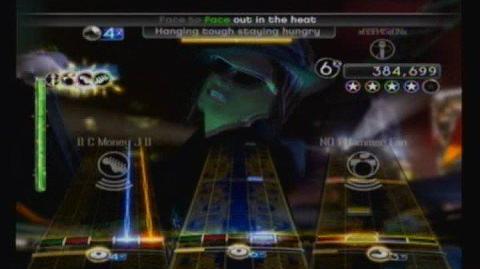