"Backwoods" is a song by Justin Moore who wrote this with Jamie Paulin and producer Jeremy Stover. He recalled to Great American Country: "We were in Jeremy's house and we were discussing my keyboard player, who grew up in Eastern Kentucky. My guitar player also grew up in Eastern Kentucky. We've become really good buddies. I went up to where he's from, Pike County, Kentucky. I thought I grew up in the backwoods! I found out that they grew up in a holler called Greasy Creek. I came back and said, 'Y'all would not even believe how backwoods this is.' One of us just started playing the melody, the guitar stuff on it, and Jeremy just started rambling, 'Rifle on my gun rack, hanging in my back glass.' That was one of those songs that we wrote in 30 or 40 minutes. We wrote it and were like, 'It could be cool,' and when we demoed it, we loved it. It's a fun song to play live."

This was released as the third single from Moore's self-titled debut album.

Moore told AOL's The Boot about the song's lyrical content: "I grew up in a little bitty town in Arkansas, back in the sticks. I've got a guitar player from Pike County, Kentucky - it's actually called Greasy Creek where he's from! I went up there, and he and I played a couple of gigs together up there. I came back home and called my producer. I said, 'Dude, I grew up out in the woods, but you wouldn't believe how backwoods this place is!' It was a song we wrote in about 20 minutes. One of us just started rambling, and the other one started playing the groove of it. Some songs you write and know it's a really good song, then some of them you get into the studio and it comes to life then. This was one of those songs. I liked it when I wrote it, but when we got done doing it in the studio, we both went, 'Man, this has got to go on the album!'"

Moore told The Boot about the song's music promo: "It was our first night shoot. It was a fun shoot. I was glad to have my band in the video. Probably my favorite thing about it is my guitar. They made me a camouflage guitar for the video. It's the simple things in life that make me happy!" 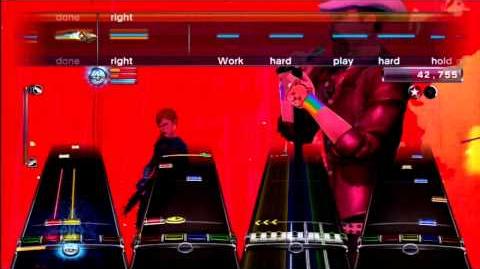 Retrieved from "https://rockband.fandom.com/wiki/Backwoods?oldid=25792"
Community content is available under CC-BY-SA unless otherwise noted.